The original design for the ROMER arm is based on US patent 3,944,798, filed in 1974 by Homer Eaton, one of ROMER's founders, while working at Eaton Leonard. At that time, the measuring arm was intended solely for the measurement of bent tube geometry. Later, Eaton teamed up with colleague Romain Graiger to create ROMER SARL (France) to create portable measuring arms for general purpose industrial measuring applications.

The word ROMER comes from a combination of the two founders' names: Romain Grainger and Homer Eaton.

The ROMER companies today are part of the Hexagon Metrology group of measuring companies.

The arm operates in 3D space with 6 or 7 joints, comprising 6 degrees of freedom (6DoF), which means that the arm can move in three-dimensional space forward/backward, up/down, left/right combined with rotation about three perpendicular axes (roll, yaw,pitch). The movement along each of the three axes is independent of each other and independent of the rotation about any of these axes, comprising the 6 degrees of freedom. The physical arrangement of the arm is much like a human arm, with a wrist, forearm, elbow, and so on. 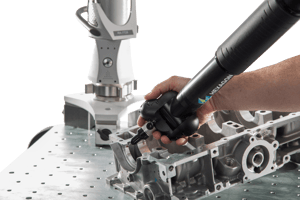 ROMER arms are used for industrial measuring tasks where the part to be measured is too large or inconvenient to be moved. The measuring arm is brought to the part, which is possible because of the light weight of the system (less than 20 pounds).